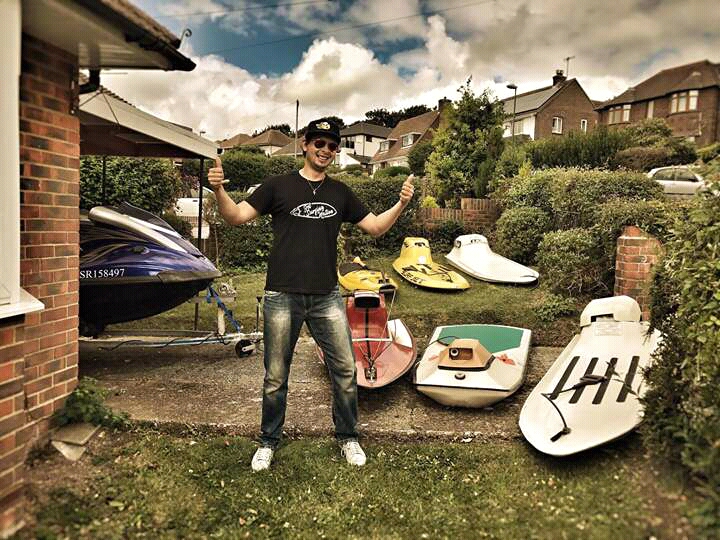 Long before state of the art surf boards like Jetsurf and Onean models dominated the waters; people have been trying to solve the wave problem that comes with conventional surfboards.

The stress of paddling, coupled with the fact that a lot of times, many surfers had to go home disappointed because there were no waves to ride got inventors cracking their heads. There had to be a better way to surf!

A surfboard that could produce its own wave and surf on calm waters was the way to go. This triggered the birth of the “motorized surfboard.”

These surfboards were not always as fast or as modern as what we have now in 2017 and they were really heavy and big. However, like all other inventions, the motorized surfboard has gone through many evolutionary steps before getting to where it is today.

Let us look at how our modern sea toys have evolved from what they used to be in the past, let us see how far we have come…

Credits: The article about the jetboard history and the video was prepared thanks to the great help of Wayne and Grant Brooks from JetBoardLimited who invited me to visit their museum of jet surfing and shared their knowledge about the history of the boards!

The first ever documented jet surf board turned up in the 1935.

It was known as the Surf Scooter, and was the first recognized motorized surfboard. The Surf Scooter was featured in a major Australian Newspaper in 1935. Here is an excerpt from the newspaper.

“Life Guard Speeds to Drowning Swimmer on Motorized Surfboard SURFBOARD riders won’t have to depend on outboard motors or speed boats to pull them over the water in the future. Below is shown a motorized surfboard scooter recently invented in Australia. The small motor in the rear furnishes the power and also sets the board at the proper angle in the water. A good machine for life guards.” 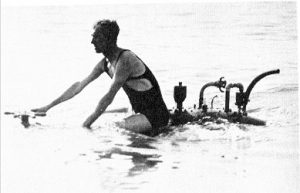 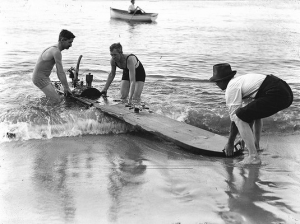 As you’d expect, when you compare the Surf Scooter to what we have today, you can see that it was both uncomfortable and unworkable. Regardless of the impracticality of the Surf Scooter, we still need to pay our respect to the pioneers of the motorized surfboard.

Skimboat was next in line; it was developed by Emil Hansen from Bryn Mawr. The Skimboat was a self-propelled motorized boat, it bore a striking resemblance to an actual boat from which it derived its name—“Skimboat” 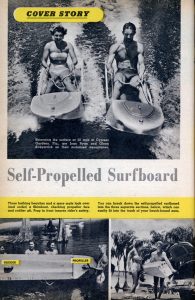 An outboard engine of 7HP powered the Skimboat, this engine was located at the front and enclosed in an aluminium hull. It was quite a heavy equipment—weighing about 120 pounds, 90 inches long and 24 inches wide. 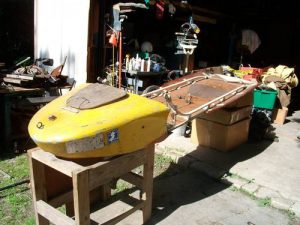 For the sake of portability, it was divided into 3 sections, to ease transportation. It managed to achieve top speeds of 30 mph and could only be steered via a rudder and turning your body. An innovative measure was installed; a safety switch which worked in combination with the tiller ropes. A magnetic switch automatically stopped the motor as soon as the switch dropped.

The Daily Telegraph, Sydney 1935, depicts people sitting on the surfboard. It is thought that the actually intention was for the models to stand on the board, but they opted to sit instead because it was more comfortable.

Regardless of the somewhat positive reception of self-propelled surfboard, it was not welcomed at the beach. The reasons include the following:

13 years after an original Australian design, Hollywood inventor Joe Gilpin finally decided to invent his motorized surfboard. Although it showed a lot of potential, poor marketing and reception eventually led to its demise.

In an attempt to advertise, Joe Gilpin released a photo of himself crossing a lake on his motorized surfboard while donning a hat and a suit. This move was counterproductive, as the surfboard quickly faded to realm of “crappy inventions.” 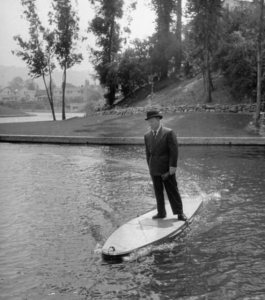 There’s a lot of blaming to go around when it comes to the failure of Gilpin’s motorized surfboard, but some still argue that it was just a matter of promoting the right product in the wrong place.

After seeing glimpses of the direction in which the future was headed in regards to motorized surfboards, stubborn inventors went to work, in an effort to succeed where others have failed, and succeed they will. The 1960’s is well regarded as the beginning of the jet motorized surfboard era!

The 1960’s was proliferated with water crafts, one of these was known as the HydroKart or AquaKart, there were many designers of the HydroKart. Kart designers, William Jackson and Wayne Ison published manuals detailing how to build some of these crafts, as a result, a lot of eager inventors went to work and many versions of the HydroKart were created, some looking like spaceships from Star-Wars! It usually permits one rider and had a special navigation mechanism that allows you to control the machine’s direction. It also used high-speed, air-cooled engines. The claim was that these engines could manage 50mph! 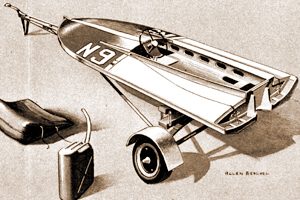 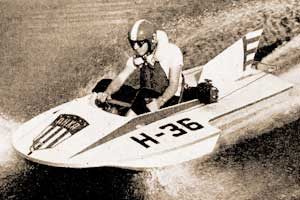 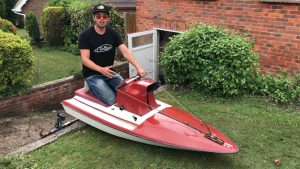 There have been controversial motorized surfboard ideas in the past, but legendary surfboard pioneer Hobart “Hobie” Alter wasn’t going to be left out.

He had the idea of fitting an outboard motor to his surfboard.

This was aimed at improving practicality and speed; however, there was the problem of safety. 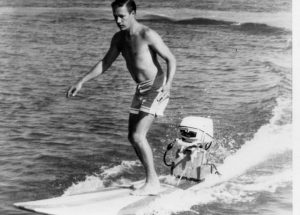 The degree of maneuverability of this surfboard is largely unknown, but there’s no doubt that it could reach impressive speeds, and speed is a tantalizing feature for any adventurous surfer.

Bloomingdale loved to surf but hated paddling, so with a vision in mind and tons of cash at his disposal he decided to do something about it. He went into full production of the jet surfboard, creating about 200 units. He ensured he utilized the best engineers and technicians, all in a bid to create a top notch product.

This of course meant that the surfboards would be very expensive! And therefore, only financially buoyant surfers could afford one. It had a dial with a magnetic lead which controlled the speed and doubled up as a safety feature, in the event of a spill, the lead will detach and kill the engine. 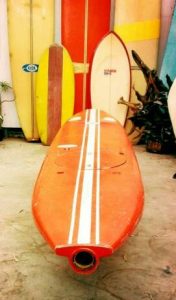 This idea along with many other design concepts from the Bloomingdale era is still incorporated in today’s highly advanced jet surfboards. Thus, it formed the basis for modern motorized surfboards.

Also in the same year (1965),  the innovative inventor George Carter, who has always been way ahead of his time came up with a machine he called the Surfjet. Although his company underwent several changes, it still lasted for many years. In 1994, they were known as, Wild Thing Watercraft, but eventually it all came to an end as they went out of business in 1998. Regardless of this, the Surfjet will be remembered as the first jet-pump personal watercraft and in terms of design, the predecessor of the JetSki’s. 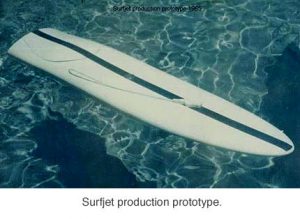 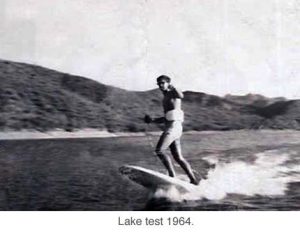 With regards to surfboards, 1965 wasn’t done yet, popular car-customizer, George Barris decided to venture into the field of motorized surfboards. He was famous for designing and building the original Batmobile, KITT and many other things. 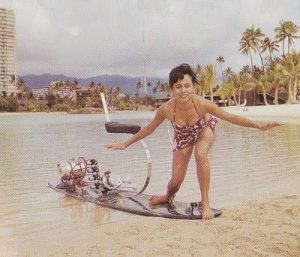 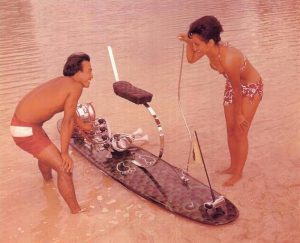 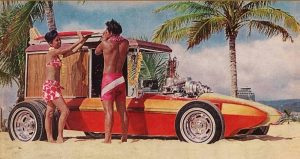 Although it looked okay, George’s motorized surfboard wasn’t very practical. It is widely believed that he merely used his surfboard as a prop to show off his building and designing skills. It was used to market and advertise the Surf Woody, which was one of George’s customized cars.

In the 1970’s, there wasn’t much invention activity with regards to motorized surfboard. However, in 1973, the Skidaddle Power surf board was built by a company called North Hants Engineering, it was a motorized surfboard that utilized the husqvarna 157cc engine. 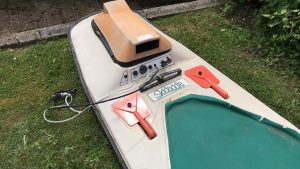 Aqua Jet honeycomb surfboards creator, Neil Townsend, came up with a motorized propeller powered surfboard. He was forced to invent this surfboard after being diagnosed with a permanent heart condition that threatened to end his surfing career.

Neil took his board to California and Hawaii, riding waves up to ten feet. 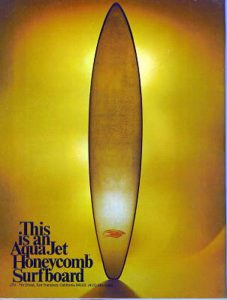 Even though his surfboard wasn’t a blast, Neil was still optimistic that his research would pave the way for further advancement in motorized surfboard technology.

Despite his health issues, his love for surfing propelled him (pun intended :)) into inventing an amazing surfboard.

Many surfboards popped up here and there, prototypes were all over the place, and inventors were utilizing Neil’s research as a basis for their motorized surfboard projects. Neil was right after all, his research eventually paid off!

Surf enthusiast, Bob Montgomery was one of such inventors. He came up with what he called the PowerSki Jetboard. Its specs were pretty impressive for its time, and was touted as being capable of delivering the perfect blend of power and maneuverability making it ideal for stunts. 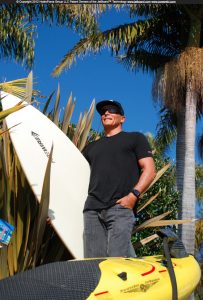 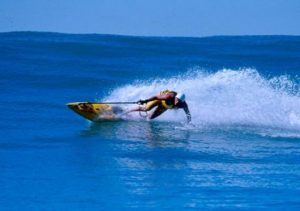 However, in the long run, the Powerski Jetboard wasn’t successful. The company ran into so many problems; including supply issues and other technical related problems.

All this progress in the 1990’s was thanks to the previous work and research of Neil Townsend.

In a 1982 interview with surf magazine, Neil had this to say, “And who’s to say -one day we may see powered boards at Sunset or Waimea Bay flying through impossible sections on those big, unsurfable offshore days.”

Of course he was right! Those days are here now!

Motorized surfboards have completely evolved today. We are seeing sea toys that are significantly more advanced technologically when compared to anything done in the past, and now with jetsurfing gradually becoming a major sport, it appears the advancement isn’t going to stop anytime soon. 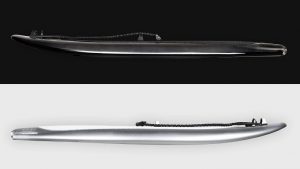 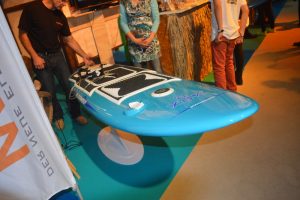 The millennium has seen the rise of powerful motorized surfboards like Jetsurf and so much more. 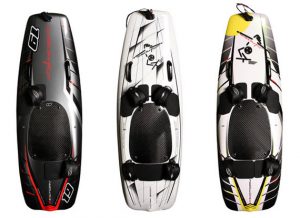 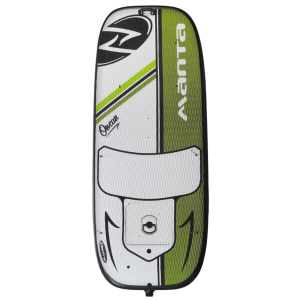 Today, we have motorized surfboards that are super-fast, highly efficient, very practicable and most of provide aesthetic appeal. This is all thanks to advancement in technology and use of modern materials like carbon fiber, reinforced rails, aerialite fiber glass, etc that were not available to their predecessors.

So, the next time you take out your jetsurf board for a ride, remember what its predecessors looked like, appreciate how far we have come and bask in the knowledge that we are going to get even better!

The Jetsurf industry is alive like never before, and we intend to see it succeed and become a standard sport and leisure activity. To that end, our mission is to test out all existing modern boards out there!

Special Thanks: Wayne and Grant Brooks from JetBoardLimited who invited me to visit their museum of jet surfing and shared their knowledge about the history of the boards! 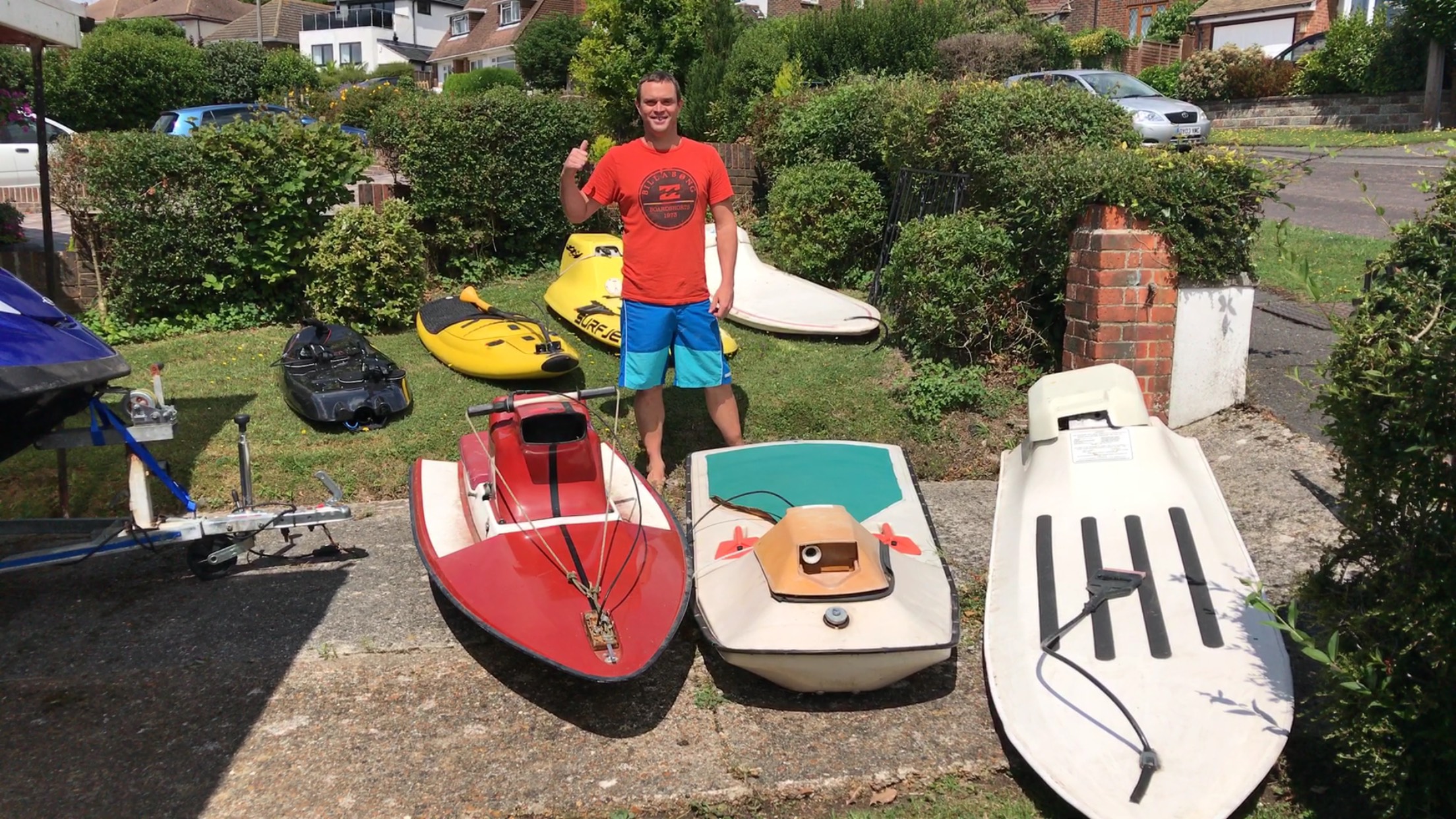