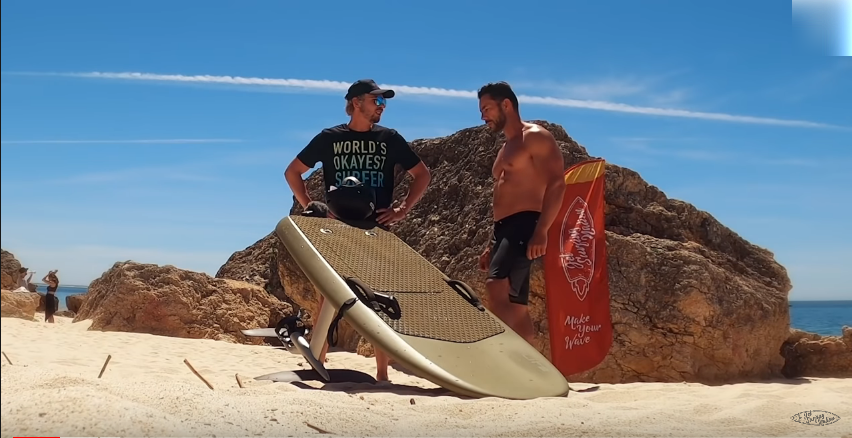 Today we are testing and reviewing Fliteboard efoil series 2. Watersports have evolved. A world-class efoil Fliteboard became even more straightforward, more reliable, and user-friendly. Find freedom and fly over water – on the world’s most advanced electric hydrofoil.

ULTRA is the world’s most extreme eFoil. The ULTRA is an adrenaline machine. At just 4 foot 2 inches, the reduced swing weight lets you push the limits.

Optional footstraps connect you to the board and the ocean like never before. Plus, they help our product testers land backflips.

The True Glide propeller lets riders fly to extremes with and without the use of the motor. Boost performance by replacing the prop duct with the Pro Tail cover.

CEO and founder David Trewern grew up in the small Australian surf town Merimbula and started to surf and windsurf with ten years. Later on, he switched to kitesurfing, breaking the GPS speed world record of 44.9 knots in 2015. Through kitesurfing, he got also introduced to hydrofoils. Flite App delivers new features with over-the-air updates.

We also made the Flitebox even smarter with a lightbar for instant communication with the rider. It’s an eFoil, not an eBoard Flitecell. The water machine integrates premium quality cells designed for high discharge combined with our world-class battery management system to keep you going for as long as you desire.

David Trewern’s Fliteboard is the world’s most awarded electric hydrofoil (eFoil). With six patents and more pending, David paves the way for others to follow by leading from far in front.

Four key components make up the entire package. They include the board, the Flitecell (battery) and Flitebox (the unit that connects to the battery to power the motor), the mast, and the fuselage.

The Virtual Gear System is one of many features that makes Flite Controller the world’s most innovative eFoil controller.

What’s so special about the unibody fuselage?

It’s a big deal. Integrating the foil and motor (instead of clamping it to the mast) results in the market’s most balanced, responsive, and efficient electric hydrofoil.

This means advanced riders can turn harder, explore further, ride faster, or have the ultimate pitch control on a wave face. It also allows beginners to learn more efficiently.

Join me on my mission and spread the good word about this new exciting sport of Jet surfing and efoiling. I am Mike, the world’s “okayest” surfer and passionate jet surfing fan and I welcome all Jet Surfing Pioneers to my new video channel: Jet Surfing Nation: Make Your Waves.

The new exciting sport of jet boarding and efoiling is evolving and together, we can be on the edge of the new next-generation jet surfing technology to test electric and petrol jet boards, motorised surfboards and efoils! I’m involved in testing Jetsurf, Fliteboard, Liftfoils, Onean Carver, Radinn, Lampuga, JetSurf Electric, efoils, Boosted fin, Scubajet, OneWheel, Mako, eSurf, eWave, and much more!

My main blog with news and updates about jet surfing, efoils, and artificial waves

👍 The new exciting sport is evolving and together, we can be on the edge of the new next-generation surfing technology to test electric jet boards and efoils

👉 Get awesome jetsurfing t-shirts and other merch here https://www.youtube.com/channel/UCEfQ…​ Use a promo code 777777 for your special 30%